So finally the warranty for my two KORAD KA3005D power supplies had ended, and I could at last modify them to make them a little bit less noisy. Those of you who have KA3005D from korad know exactly what I’m talking about, and for those who don’t, let me tell you about my experience… 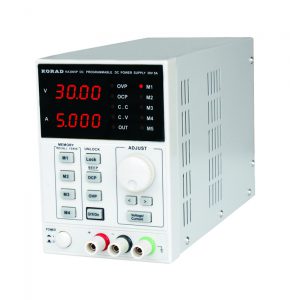 Show me what you’ve got inside…

First of all, I think that buying those two korads was a really bad decision… It’s not that I expected God knows how much from those two power supplies at this price, but some things are totally not acceptable even in very low quality builds from low-brand companies.

From the very beginning, just after I got my ka3005d, I had plenty of problems with them. The first unit had to go back to the supplier about a week after I received it, because unexpectedly I got around 14VDC on output, no matter how I would set the voltage and current. My main scope of interest are digital circuits and most of the time I use 3V3 and 5V powered circuit, so you can imagine how much damage this issue could have done if I hadn’t been careful enough. In the second unit there was no isolation, no heat-shrink on soldering points, on 230V AC power rails, which go from the back panel main socket to front panel mounted on/off switch. And the space between those joints and the metal chassis was about 2 or 3 mm (not more, in any case). The soldering joint of the main wires was of such a poor quality that it broke after few months of normal use and I got full 230VAC on the chassis! Luckily, the main panel is made from PVC and it didn’t hurt me, but it is totally not acceptable in any gears, even those “el cheapo”.

Maybe it is only my bad luck with these power supplies, and only my units were broken, but set aside safety and quality, I think korad ka3005d is simply badly designed. Let’s say that we ignore those esoteric DACs, which were built on shift registers and R2R leaders, on some other fancy-Chinese-solutions, but I can assure you that the Chinese that designed those units have absolutely no idea of what the thermal resistance is and how to handle it in design. Below, there is a picture of the original “radiator” from korad ka3005d, which should handle – according to the manufacturer – 150W of power to the output. 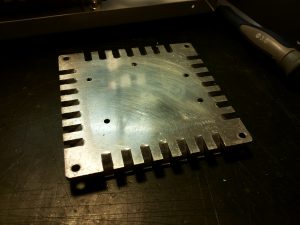 This aluminum plate was stacked up with standard PC 80×80 fan (ultra noisy bastard!), and this fan is my main hero for this blog note. The Chinese decided to torture us with that little noisy bastard, which produces the sounds that are similar to my bmw V8 engine on high revs! 😉 But that was not enough for him, he decided to supply it with PWM modulation, which was literally playing the devil’s song on this fan and raping my ears.

My hack of the cooling system in korad ka3005d is nothing special, really. I just replaced that silly radiator whit a proper one, added a thermostat and a new, less noisy fan.

As for the radiator, I used the PR161 aluminum profile produced by the German company ALUTRONIC. The 100X100mm rectangle radiator fits perfectly inside the case, replacing the original one. 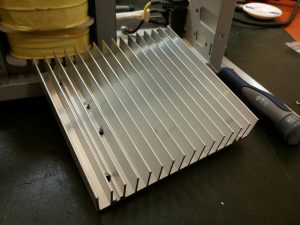 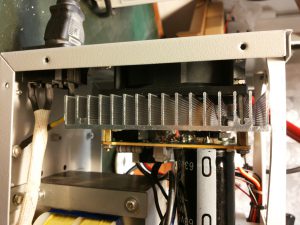 And here is some more info about the PR161 profile from Alutronic. 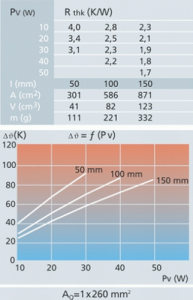 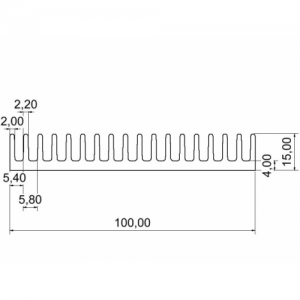 I used the old radiator plate, as a template to drill the holes in the new radiator. And I mounted the whole stack (pcb + radiator + fan) using the original spacer sleeves, I just flipped it over, so the part with the M3 screws goes up, and mounts pcb with nuts. And from the fan side, I used 40mm M3 bolts, which go through the fan, the aluminium profile and screwed them into the spacer sleeves.

Then the whole “sandwich” was mounted to the chassis using the original screws. You can see all the mounting details in the pictures.

As for the thermostat, I used a bi-metal thermostat that was closed in the TO220 package and screwed into the radiator. 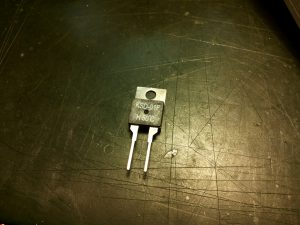 When I load my power supply, after this mods, with 50W of load, the fan does not turn on, which is in my case very important, because I mainly use less power than that, and this gives me a totally quiet, fan-less power supply.

When I load it with 2Amps and 25Volts, the temperature of the radiator is settled at around 42°C. 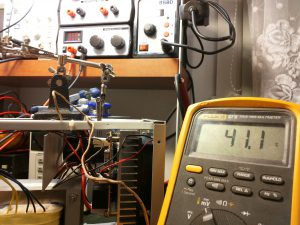 On full load, in the worst case for the power supply (maximal voltage drop on power transistors), the temperature of the radiator, with the fan turned on, never goes above 70°C, which allows me to use ka3005d in a continuous mode, without the risk of overheat.

As I have written above, I mostly use those two power supplies for low voltage and low current applications, so basically the fan is not needed at all, but for those of you who want to make high current work with korad ka3005d even more comfortable, you can add (in parallel with the fan power supply) a little (47uF – 100uF) filter cap, which will filter those rails and cut off pwm noises. 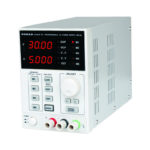